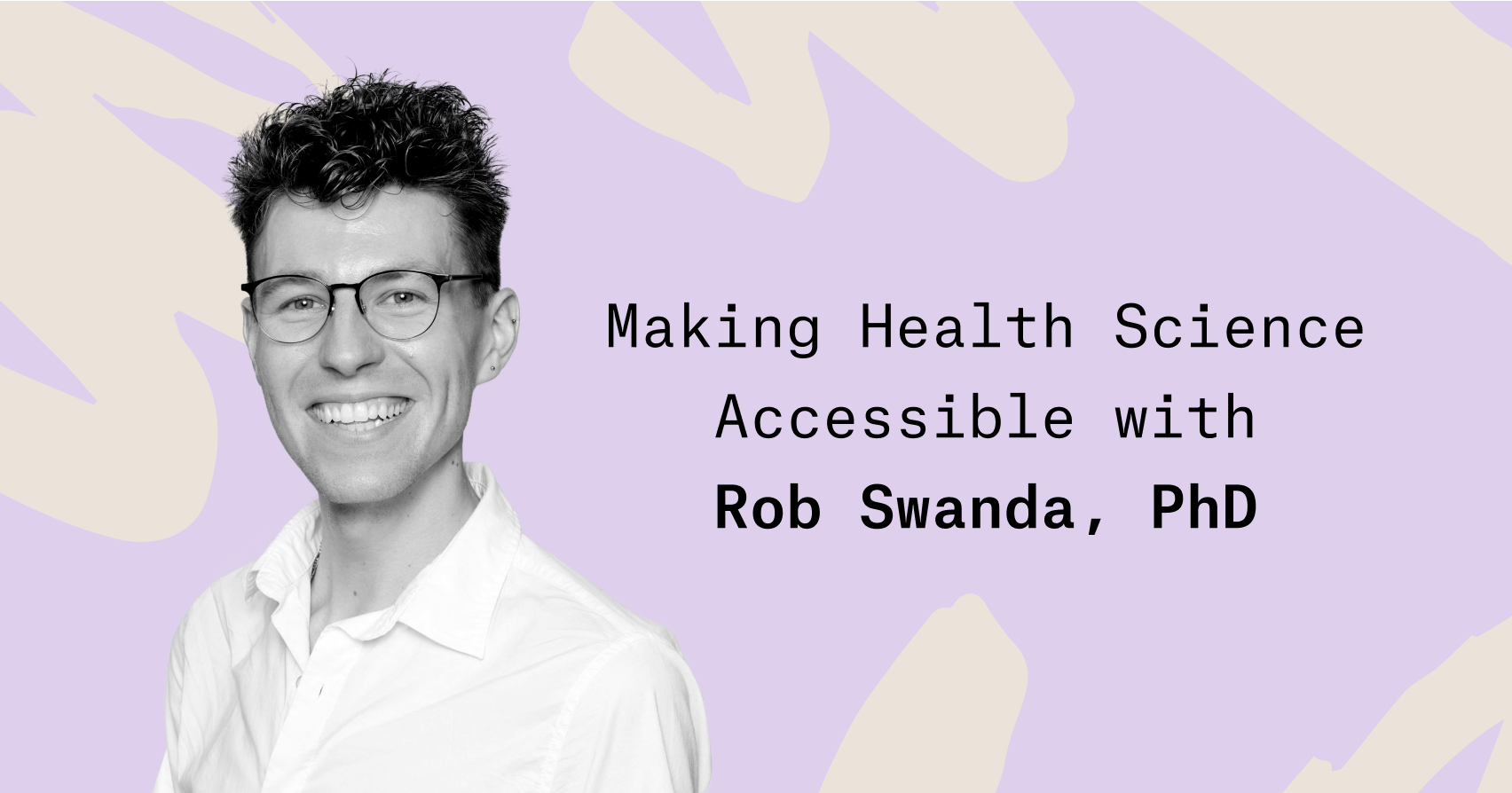 In an effort to make health science information accessible, Carbon Health has partnered with Rob Swanda, PhD to answer questions about diabetes, from actual people (via Dr. Swanda’s Twitter and newsletter followers). Dr. Swanda is joined by Dr. Sushma Reddy, an endocrinologist with Virtual Diabetes Care at Carbon Health, to tackle the diabetes-related questions below, and many more in the full-length video discussion found near the bottom of this post.

Diabetes Statistics in the United States

Dr. Swanda: “Please, give everybody a brief overview of some statistics related to diabetes.”

Dr. Reddy: “It's really mind-blowing to me because diabetes is just rising in epidemic proportions. We are seeing more and more individuals with diabetes. In fact, we now have about 37.3 million people in the United States that have diabetes, that's ~11.3 percent of the population. And sadly, about 23 percent of them don't even know that they have diabetes. Then when you look at pre-diabetes, which is kind of a precursor to diabetes, there are ~96 million people with pre-diabetes in the United States. That's about 38 percent of the population, so we're just having a pandemic proportion explosion of this condition.”

What does high blood sugar do to the body?

Dr. Swanda: “Since high blood sugar in our bloodstream can cause diabetes, or plays a role in diabetes, what is it actually doing negatively to our bodies?”

Dr. Reddy: “Great question! Normally when the pancreas is working it's making insulin and that helps to metabolize our different foods and keep the glucose levels normal. Now when these glucose levels go up over 200, acutely you can have symptoms. You could be urinating a lot because the glucose is so high, you could be feeling thirsty just chugging down water, losing weight, or have blurry vision, or have infections or just feel weak all over. That's more acutely what happens when it goes up. If you do have diabetes and the glucose levels are high over time then that high glucose is now damaging your organs. You can get eye damage that could lead to blindness. You could get damage to your nerve endings and get that thing called neuropathy where you have numbness and tingling and can lose feeling in your feet or hands. It could also lead to heart attacks or strokes at an earlier age. It can also lead to kidney problems, so lots of bad things can happen when that blood sugar is high and not controlled.”

Can you reverse diabetes?

Dr. Swanda: “There have been some individuals who mentioned that they had type 2 diabetes and then eventually they were able to actually reverse this condition, so what does that actually look like, and how does somebody go about maybe potentially reversing their type 2 diabetes?”

Dr. Reddy: “I'm really happy to hear that some of them were able to reverse it, and to be honest the word reversing is a little bit of semantics. We don't like to use the word reversing because the defects, that is, the beta cells of the pancreas, not working and the insulin resistance are still there in those individuals with type 2 diabetes. So really what we like to do is call it remission. And what we mean by that is that they changed their diet and lifestyle such that they were able to get their glucose to normal, that's what we would call a remission. If they got their glucose to the pre-diabetes range we would call it a partial remission. So, really by changing your diet and lifestyle, and using medications for a short period of time, it may be possible to get into remission. In some individuals that are newly diagnosed, there's also a phenomenon called glucotoxicity. What that means is when the glucose levels are really high, it is kind of like the glucose is paralyzing everything, so nothing can work and your pancreas can't work. It's in slow motion, so now if you get on insulin or medication or whatever your physician or endocrinologist thinks you need, and you get those levels down and keep them that way for four weeks, your pancreas can start to work and you'll see some recovery of those beta cells. So, oftentimes patients are able to, with diet and lifestyle, get their glucose levels to what looks like a normal range, but I wouldn't call it a reversal it's more like they're in remission and that their glucose levels are staying in a really good optimal range where they are not at risk for complications.”

Are there new stem cell therapy for diabetes or gene therapy treatments?

Dr. Swanda: “Is there anything that is coming out in the news that could be eventually used for diabetes?”

Dr. Reddy: “Yeah! Diabetes is a really exciting field to be in right now because there are a lot of new developments. I feel like I have more tools at my disposal to help my patients. In individuals with type 1 diabetes as we mentioned the pancreas is not making any insulin and so they have to take insulin injections. So really the main treatment for them is to give them back insulin. If there was a way we could give them back the beta cells of the pancreas that were making insulin that would be awesome, and that's what researchers have been working on. They've actually taken stem cell lines and done genetic modifications so that these stem cell lines when implanted into a patient can now become insulin-producing beta cells. And then, the next thing is to put them in a little pocket so that they don't get destroyed by the immune system because the immune system will go 'oh what are you doing here, you don't belong and it will try to attack it. Researchers have tried different ways of doing this implantation and putting a cover around it so the blood doesn't see it by using what's called a CRISPR technique, so you have different genetic modifications so it's not recognized by the immune system. The body says 'oh that may be one of our own beta cells and it doesn't destroy it. What's really exciting to me is that they actually presented data at the Endocrine Society a couple of months ago where they had 10 patients who got these stem cell transplants and they actually showed that they were producing insulin, so it's kind of proof of concept. Again it's going to be several years before anything comes out as actual treatment, but it was just exciting to see that it was actually working. Still a lot of steps that need to be done though.”

What is fasting blood glucose?

Dr. Swanda: “Would you mind just giving a description of what exactly is fasting blood sugar and why is important to be on the lookout for?”

Dr. Reddy: “Yeah, fasting glucose is important because that's really what you wake up with. And in normal individuals the liver makes sugar when we sleep because we're not getting up in the middle of the night and eating, at least most of us aren't, however in individuals with diabetes the liver goes 'oh you're not eating and it makes too much sugar. So they wake up with high glucose, and if your fasting glucose is elevated that could be the first sign of pre-diabetes or diabetes. So then, you need to do something to address it, so fasting glucose is really important to know where it is. And so is an A1C test, which gives you an average of your glucose levels over the last two months. This can be easily done in the office with a finger stick today, so if I walk into an office, I can have a finger stick done and know what my A1C is right away and know if I have pre-diabetes or diabetes or at least if it's suggestive of that. So it's really helpful to know that.”

Dr. Swanda: “I also want to just mention if diabetes runs in someone's family what is their likelihood of getting diabetes or what should they maybe be on the lookout for? Is there any special information that they should be giving to their primary care provider? What are your thoughts on that?”

Dr. Reddy: “In individuals with type 2 diabetes that's where it typically runs in the family, so in other words, if your mom or dad had diabetes you have the gene for diabetes in you but you don't develop diabetes until you get to an older age, or you're overweight or have a very sedentary lifestyle. So, if you have a family history of diabetes you definitely want to start checking for it from age 35 onwards for sure with an A1C or a fasting glucose test. But, more importantly, you want to maintain a normal weight and a physically active lifestyle. So, just to give you an example let's say you're overweight and you weigh let's say 200 pounds. If you lost seven percent of that, that's 14 pounds and you did 150 minutes of exercise a week, so that's 30 minutes of just brisk walking, you don't need to buy a gym membership, just brisk walking five days a week, you would reduce your risk of developing diabetes by 58 percent. And, if you think of individuals, they used to call them old but I don't anymore, who are over 60, for them if they reduce their weight by seven percent and do that activity of 150 minutes a week, they reduce their risk by 71 percent. So, when I see people go 'yeah my mom had diabetes, my dad too, so will I' I'm like, no it doesn't have to be that way! Just because they had it doesn't mean you will. You can take steps now so you're not following in their footsteps and that's really important to do.”

Rob Swanda, PhD is an mRNA biochemist and science communicator who obtained his PhD from Cornell University in 2021. Follow Rob Swanda, PhD on Twitter: @ScientistSwanda‍

Dr. Sushma Reddy is an endocrinologist with Virtual Diabetes Care at Carbon Health.

Beauty Supplements: Do Any of Them Really Work?

New COVID-19 Treatment Options: What You Need to Know

Urgent Care: What Is It and What Should I Expect?

Eight Tips for Keeping Your Skin Healthy This Winter

True Omnichannel Primary Care Is a Revolution in Healthcare

Intimacy Fizzled During COVID-19? Here’s How to Rekindle the Spark with Your Partner.

LGBTQ+ Clinician Opens Up About Unique Challenges of LGBTQ+ Care

How to Discuss “Embarrassing” Topics with Your Doctor

Setting Realistic Expectations for a Healthy and Fun Post-Lockdown Summer